There is so much to see and do in Whitby that it can be often hard to decide where you'll explore on your trip. We've put together a list of must-visit places in Whitby to help you out!

The famous seaside town is filled to the brim with a rich history that is just waiting to be soaked in by tourists. To be sure that you get the best from your trip, the Whitby Guide has compiled a list of 5 places that you must visit on your trip to Whitby. 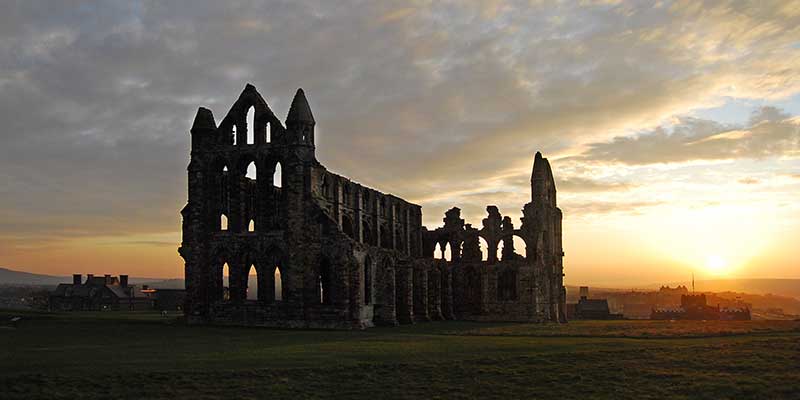 If you have an English Heritage card you can enter the Abbey for free, or you can pay a small fee otherwise but it’s completely worth it.

Whitby Abbey is bathed in history, it’s one of the first Abbey’s built in England, and is also one of the Abbey’s that fell victim to Henry VIII’s reign, not only this but the Abbey is supposedly haunted by a number of ghosts, St Hilda is said to still haunt her grounds.

The Abbey ruins are spectacular and are a great adventure for families to go on, inside the old Cholmley home too there is a small museum with relics found by archaeologists around the Abbey with some headstones also kept, not only this but as you walk around the grounds there are artist impressions of what the Abbey would have looked like when it was in use.

St. Mary’s, high on the East Cliff is Whitby’s Parish Church and was founded in 1110. Some parts of it date back to Norman times, the early 12th Century. It has been modified and extended over the centuries without being completely rebuilt.

The lovely interior is essentially 18th Century and an excellent example of pre-Victorian furnishing. That interior contrasts dramatically with the fortress-like exterior which fits well with the North Sea setting which can be wild and stormy at times. The location of the Church is close to the ancient Whitby Abbey and both receive a significant number of visitors each year.

You get a stunning view of the harbour from the benches behind the Church here, perfect for a quick break to take in the scenery.

Not only is Whitby Abbey right next door to St Mary’s Church but it also sits on top of the 199 Steps. The origin of the steps is often disputed, the first record of the steps was in 1340 though it is widely believed that St Hilda would use the tiring steps to test her follower's hundreds of years before.

They are an important part of Whitby history and in the 19th century when St Mary’s Church was still open for burials many people preferred to be carried up the steps in their coffin, when you walk up the steps you will notice a couple of benches and if you think they were made for sitting then you are wrong, the benches were actually placed there so pall-bearers could place to coffin on the bench and have a rest.

Down from 199 steps, you will find the Fortunes Smokehouse and shop that is famous worldwide for its excellent quality kippers. The smokehouse is a must-visit when you come to Whitby, not only to get yourself some beautifully smoked kippers but to meet with the lovely owners and get some knowledge on Whitby’s fishing history.

In 1872 William Fortune founded the now historical, and only Whitby, smokehouse, it has since been passed down through the Fortune family and is currently on its sixth generation! Don’t worry if you think it’ll be difficult to find, the gorgeous smell of the smoked kippers will lead you straight to it.

If you’re looking to get yourself some souvenirs from Whitby then there is no better treat than some famous Whitby Jet. If you’re wanting some history in your jet then head down to W. Hamond, the original Whitby Jet shop that was established in 1860. The skilled craftsmen still continue to make the finest quality jewellery some 150 years later, and the customers keep coming to buy a little bit of Whitby history. Whitby Jet, which is found along the cliffs of Whitby, is from the early Jurassic period and around 182 million years old! Its famous deep black colour coined the term “Jet black” and “As black as jet”.

This one you’ll need a car to get to as it is just outside of Whitby, but it’s definitely worth the short drive. The Falling Foss tea garden is set inside a small cottage on top of Falling Foss’s beautiful waterfall. Not only is the charming tea garden somewhere for you to relax but the grounds are also very beautiful to walk around, the gardens are a favourite for children as their imaginations go wild whilst they run around the enchanting place, though saying this Falling Foss is suitable for any age. The tea room is only open seasonally between April and September but the woodlands are available to walk all year around.

If you would like to add your input to this article, please use the comments below and we will happily review and include your suggestion on our website.