February half term is a difficult children’s school holiday to amuse children after the Christmas and New Year period. It is still cold, wet and dark, no twinkling Christmas lights and the excitement of the holiday season to keep the cabin fever at bay. So, I decided to drag my 11-year-old son and 13-year- old daughter out into the fresh cold air to Whitby’s Museum and a walk through Pannett Park as a good half term filler day today. One of the perks of being a local Whitby resident (with proof of residency) is that admission is free but to help support this fantastic Victorian museum you must pop a donation into Clarence the crocodile that guards the entrance to the museum.

Whitby Museum and art gallery can be found within the land of Pannett Park. This land was bought by Robert Elliott Pannett in 1902, over 116 years ago. This land was used for market gardens, nurseries and orchards at this time. Mr Pannett championed this land to be for the people of Whitby to enjoy a different environment of trees and flowers in contrast to the beach and cliffs of Whitby. The council at this time did not support his vision until after his death. He had set up a trust to create such a park, with a museum and it has be enjoyed by visitors and locals ever since. It is maintained by the Friends of Pannett Park with funding from the Heritage Lottery Fund and Big Lottery Fund Parks. This park has paths that lead to fossils, crocodiles with squirrels running about and a floral clock display. 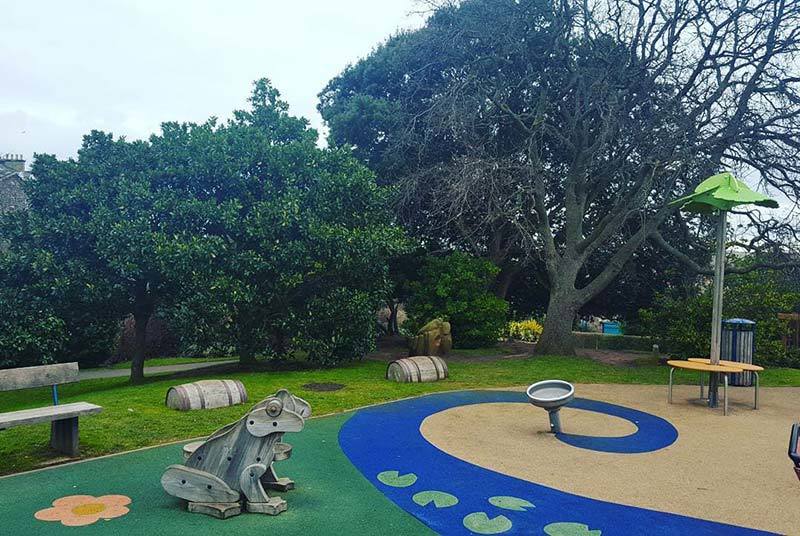 There is a maritime themed play area just outside of the museum which features a pirate ship, a sea monster, a crow’s nest and a dinosaur egg feature. This area fuels any child’s imagination whilst running around from swings to bridges to becoming a captain of a sail boat, with Whitby Abbey in the background. My son when he was little used to call Pannett Park, “Panic Park” but it does become “Panic Park” when they go off in search of hidden features under a tree in the park. This play area is a great place to keep them entertained and burn off energy.

The museum that was opened in 1931 but it was actually established back in 1823 as an art gallery that houses local artists and The Staithes group, this part of the museum is free to view. The actual museum holds glass cabinets filled full of Jurassic fossils and walls that are covered with remains of the gigantic beasts that have been found in the local area. There are vast displays of jet that was crafted in Whitby and history of this craft. In the natural history section of the museum, there are animals and birds that can be found in this local area. Once taking my young niece around, she asked why were the birds frozen? I told her they were under a spell and they couldn't move! I didn’t want to scar her for life, with the fact they were running or flying around in the early 19th century!

There are various exhibitions during the year that are on the top floor with a costume gallery and on the ground floor. Today we saw displays of beach wear from the Victorian period up to the fifties from visitors that came to Whitby would have worn. We went back down to the explorer’s wing to view the story of Captain Cook and the Scoresby's. After looking through treasures from far off lands from the other side of the world, you can then view many local historical treasures in more cabinets found around Whitby and its surrounding area such as pottery and stone age finds. Another wing is home to the shipping history of Whitby with boats upon boats and even boats in light bulbs and bottles.

I always like to save the Hand of Glory for last, this is the ultimate exhibit of the museum. This is the urban legend of a decapitated hand that would send home owners to sleep whilst they were looted in the night. It is said that these hands came from being cut off whilst a body was still swinging at the gallows. It would be pickled, and it would also be the right hand- the fingers would be lit during the deed of robbing their victim. If one the fingers did not stay lit, it would mean that someone in the house would stay awake. Whitby Museum has homed this item since 1935 after it was found in thatched cottage in Castleton. There are plenty of horrible history items in the museum to find and cabinet full of leeches is an interesting sight.

To lure my children to the museum and to get some fresh air in their lungs away from gadgets and my daughter becoming a social media celebrity on Musical.ly, I promised them a Mini Egg caramel hot chocolate at Java Café, Whitby on Flowergate. I had a cookies and cream mocha topped with mini Oreos to warm me up. They did not disappoint, and these drinks were well worth leaving the comfort of my four walls for. This café has a wide menu range and it is nice to sit in the window and watch the world go by. But I had used up my teenager’s time, so I had to sit upstairs so that her friends would not see her with me!! I had l already been ordered on the way down to cross over the road, so that she was not spotted under parental guidance in public by some children her own age!

Overall Pannett Park and Whitby Museum is wonderful place to go in any season to view its treasures and to encourage any age group to partake in fresh air and learn history. Just like Robert Pannett envisioned 116 years ago, this park is a haven of flowers and trees amongst the beaches and cliffs of Whitby.