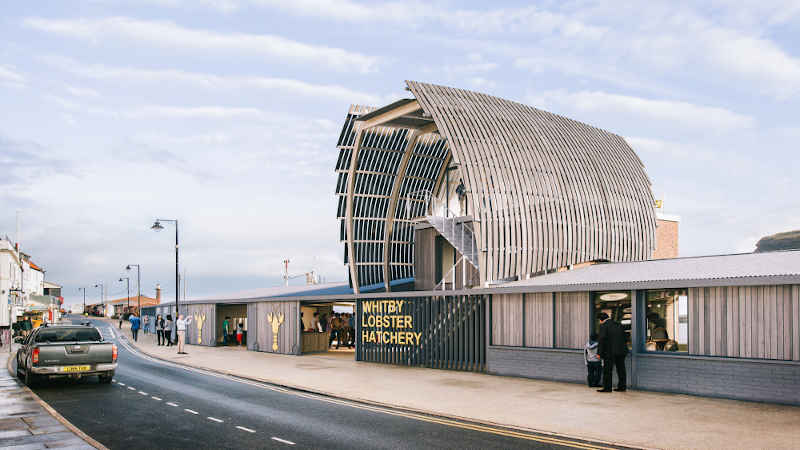 Enjoy this exclusive virtual interview by Lindsey Ebbs of Lindsey Ebbs Podiatry. Read on to find out how you can help support the Whitby fishing industry by making a donation to the Whitby Lobster Hatchery on Crowdfunder.

After reading about the concept of building a Lobster Hatchery in Whitby, I couldn’t help but want to know more of what could be a project that will sustain the fishing industry for years to come in Whitby.

After all, Whitby has always been referred to as a fishing town…can you imagine if it no longer had a fishing industry?

I do recognise that there will not be any fisherman’s wives making ganseys on the pier as that aspect of fishing sits very much in the past but Whitby losing its fishing identity could actually be a reality after all, who would have thought we would have no babies born in Whitby anymore?

Joe Redfern very kindly let me interview him on how this project could get off the ground and how it would benefit Whitby in the long term.

So, if you have a few minutes spare, please give it a read and if you are in a position to help donate a small amount then all the relevant information is at the end of the page and is very much appreciated.

Joe, The Lobster Hatchery is a great concept for Whitby, what made you think of Whitby above any of the other coastal towns?

Whitby has a long-standing fishing and maritime history which has seen many changes over the years. Most recently the collapse of the white fish industry which has led to the current boost in potting boats fishing for crabs and lobsters. We want to celebrate that history and make sure it is conserved for future generations.

Whitby is a special place which has a thriving fishing industry as well as a booming tourist industry. It is the ideal location to mesh both of these industries to provide a positive future for the Whitby fishing fleet and Whitby’s tourism industry.

The location we have along pier road is the perfect spot to showcase the work of the hatchery to lots of people while having an important link to the fishing industry.

Who is involved with this project, how did you all come together and what part does everyone play?

The team so far is only very small; Terry Pearson who owns the Lobster merchants on the Whitby fish quay and had the idea for the hatchery a couple of years ago and has slowly been making progress to make his idea a reality.

Mike Russell who works on the fish quay weighing the landings of lobsters and looking after the tanks. He has spent many years on the RNLI lifeboat and is a veteran of the Whitby Maritime Industry. He plays a hugely important role in promoting the idea and connecting with Whitby’s fishing fleet.

I have a well-rounded approach to the project, I moved to Whitby working as a marine biologist for NEIFCA (North Eastern Inshore Fisheries Conservation) to the local fisheries authority.

I have studied marine biology for 4 years obtaining a masters of research which has just been published in a scientific journal. Since finishing at NEIFCA in March 2020 I have been working as a Lobster fisherman in Whitby.

Therefore, I have a scientific prospective, a management prospective as well as first-hand experience living as a Whitby Fisherman. I know most of the fishermen personally and believe that integration of the fishing community into the project is imperative.

We have also had a lot of help from local volunteers, who have all been amazing. Offering their time to promote our Crowdfunder and assist with social media.

Whitby has been long recognised for its fishing industry and I know the fishing fleet has been severely depleted over the years but how many fishing vessels are actually working from Whitby presently?

Yes, the outlook of the fishing industry in Whitby has changed dramatically over the years. Around 2000 to 2005 there was a huge fall in trawling boats.

New investments into potting boats has resulted in an increase of 380% in the landing on lobster in Whitby over the past 20 years. There are around 30 active fishing vessels operating out of Whitby supporting over 100 local jobs.

Tell me more about the Lobsters, am I right in thinking that 99% of lobster larvae (baby lobsters) don’t survive in the open waters due to predators, has this situation changed over the years and why?

Yes, lobster reproduction works with an ‘R’ dominated type of reproduction meaning they produce many offspring with little to no care for the offspring when they are released.

This results in a low survival rate, however who has time to look after over 5000 babies each season?

There hasn’t been any recorded change in the survival rate of juveniles but due to the increase in fishing activity the populations could be at risk of decline.

By raising the lobster larvae in a hatchery, we can increase the 1% chance of survival to around 20% boosting lobster numbers.

How long do the lobster larvae need to be kept in the hatchery and out of the 100,000 released each year, what are the survival rate and how old do they have to be before they can be fished?

Lobster larvae will be kept in the hatchery until they reach at least ‘stage 4’ of their development. This means they have gone through 4 cycles of moulting and growth turning from floating planktonic larvae to a ground dwelling tiny little lobster.

After stage 4 they have survived past the most vulnerable time of their lives and are ready to find a spot on the reef. In the hatchery this we take between 6-8 weeks from the eggs hatching before releasing to the wild.

Once released each lobster will take 5-7 years to grow to an adult lobster measuring 87mm along their carapace. In this time, they will have a chance to reproduce, adding to the lobster populations before being legal size to be fished.

You are crowd funding presently to achieve the initial £20k required for start-up costs but what will happen after that? Will you be able to apply for grants to proceed with the project and how long will it take before you are up and running if the initial funding is achieved?

Yes, the crowdfunding page is our big push at the moment. It has been very difficult due to the pandemic but we believe we can still reach our goal by January 10th if the public and local business support our project by donating.

The money will be used to progress the project from a conceptual design to a more complete and rounded design. We will then be in a better position to apply for larger grants from the government, lottery etc. to fund the total start-up cost of the project.

The timescale is very difficult to predict until our Crowdfunder is complete and we can secure some larger funding.
We want to release juvenile lobsters and protect the fishing industry as soon as possible.

Will the educational and interactive centre be open at the same time as the hatchery or will that be a later addition?

This depends on the funds we can secure. We hope to open at the same time to showcase the hatchery and some native marine wildlife in our tanks.

The hatchery will be dependent on income from the visitors centre so come on down when we are open and see the amazing work we will be doing!

If you feel you can contribute something to support the Whitby Lobster Hatchery, then click here to donate via the crowdfunding page.

Thank again to Lindsey Ebbs of Lindsey Ebbs Podiatry for this exclusive virtual interview with Joe Redfern of the Whitby Lobster Hatchery.

You can learn more about the plans for the Whitby Lobster Hatchery in the video below.