When you visit Whitby you will spot Captain Cook references all over the town. Here we discuss Captain Cook's great connection with Whitby.

Whitby attracts tourists for a variety of reasons. Some people come to see the regional arts and crafts, while others come to see Whitby Abbey or surrounding coastal towns such as Robin Hood’s Bay. While these are all popular attractions, many tourists come to trace the path of the famous Captain James Cook. 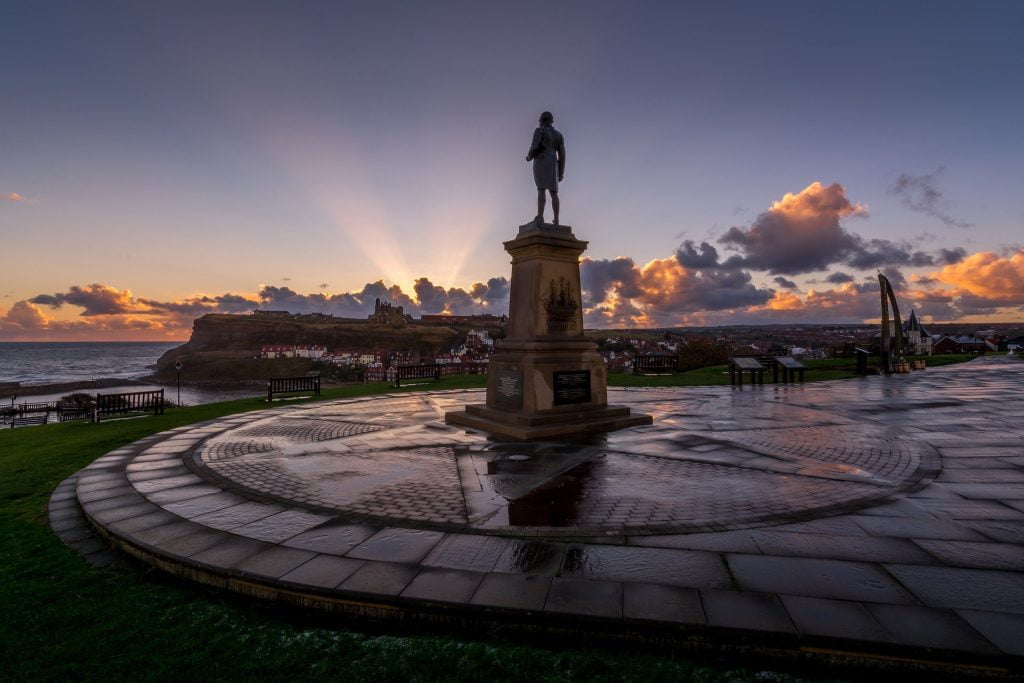 In fact, Whitby and Captain Cook will always go together, for without Whitby, there may never have been a Captain Cook.

Who was Captain Cook?

Captain James Cook needs little introduction; British explorer, navigator, cartographer, and captain in the British Royal Navy. Famed for his discovery of Australia. Captain Cook is one of Whitby's most famous modern heroes.

Cook was born in Middlesbrough to a Scottish farm labourer, also named James, in 1728. Airey Holmes farm was his early childhood home and Mr Thomas Skottow, the farmer, paid for James Cook to attend the local school. After a four-year stint on the farm with his father, at the age of 16, he travelled to Staithes to serve an apprenticeship as a shopkeeper and haberdasher. Records speculate that it was here that Cook first fell for the sea.

Shop work didn't fit Cook. After just eighteen months he was introduced to the Walker brothers at Whitby. John and Henry Walker were friends of Sanderson the haberdasher and agreed to take on Cook as a merchant navy apprentice. For many years Cook plied coal along the coast between the Tyne and London aboard the Freelove. At this time Cook was living with the Walkers at their house on Grape Lane. It is this building that is now preserved as the Captain Cook Memorial Museum.

His apprenticeship complete, Cook sailed the Baltic trade routes and passed his exams in 1752. He progressed quickly to be offered command of collier brig, Friendship, in 1755. Less than a month later, sensing an opportunity for advancement and adventure, Cook had enlisted with the Royal Navy.

Cook stated that he intended not only to go;

During the Seven Years' War, Cook established a reputation for cartographic and topographic skills, notably, he created the map that was used to help General Wolfe mount a surprise attack at the Battle of the Plains of Abraham in 1759.

Cook would spend the next five seasons in the region of Newfoundland mapping and surveying all the coastline, rocks, and hidden dangers in maps that were used for the next 200 years. He also conducted an astronomical observation; on 5 August 1766, he measured the eclipse of the sun with longitude taken at Newfoundland and cross-referenced with England.

The Royal Society was greatly impressed as were the Admiralty, at a time when the high seas were determining the direction of travel, not only for Cook's career in the Royal Navy but also the expansion of British interests overseas.

Captain James Cook undertook three great voyages for the Royal Navy and in doing so secured his reputation as one of the greatest maritime explorers of all time.

Captain Cook Memorial Monument is a 7ft 6inch bronze statue to commemorate the men who built the four ships that Cook used on his voyages; Endeavour, Resolution, Adventure, and Discovery. Situated in People's Park on the West Cliff, the statue commands a majestic view of Whitby Harbour, East Cliff, and St Mary's Church.

The inscription on the south face of the statue reads:

For the lasting memory of a great Yorkshire seaman this bronze has been cast and is left in the keeping of Whitby; the birthplace of those good ships that bore him on his enterprises brought him to glory and left him at rest.

The bronze statue of Captain James Cook also has an inscription that reads:

Front: To Strive, to seek to find and not to yield. To commemorate the men who built, the Whitby Ships and the men who sailed with him.

North Side: In every situation he stood unrivalled and alone on him all eyes were turned.

Tourists can relive many of the aspects of Captain Cook’s life when they go to Whitby. For starters, they can go to the Captain Cook Memorial Museum. The museum is inside John Walker’s house. Visitors can view the attic, which is believed to have housed Cook when he was on land. People can also see a model of Cook’s ship the Resolution, as well as a letter Cook wrote to Captain Hammond. These are just a few of the things people will find inside of the museum. The museum has several other relics, so you can easily spend quite a bit of time going from one artifact to the next.

Whilst in Whitby definitely climb aboard the Captain Cook Experience Cruise. This cruise takes you out to sea to hear stories about the life and adventures of Captain Cook on the way. If you are interested in history, you will certainly love this adventure. Also, you’ll have a good time even if you don’t love history, thanks to the stunning views that you’ll see from the ship. If anything it's a beautiful way to see Whitby.

You can also take a Captain Cook Country Tour. If you do this, you will get to trace Captain Cook’s steps, all the way from his childhood home to Whitby. This is perfect for people who want to immerse themselves in everything that is Captain Cook. Just make sure you set aside enough time to devote to this tour. There will be a lot of travelling, so you don’t want to try to pack it in if you need to run from one activity to the next. Instead, you want to clear out several hours of the day so you can get the most out of this experience.

Following this, if you’re not all Captain Cooked out walk along the harbour to see and climb aboard the  HM Bark Endeavour. This replica has been renovated into a ship you can visit today. Aboard this floating museum, you will find all sorts of interactive displays and interesting snippets of history. On the main deck, there is a range of experiences such as learning nautical knots, cooking up a map, and sea shanty karaoke. On the top deck, you’ll find the capstan, ships wheel, canons, and the curious seat of ease.

These are just a few of your options if you want to have the complete Captain Cook experience in Whitby. Whitby and Captain Cook go together and you can become a part of it during your vacation. Book some tours and plan out different places you want to see that are related to Captain Cook. Then, you can head out to Whitby with an itinerary full of fun and interesting things to do. By the time you finish your trip, you’ll be an expert in all things related to Captain James Cook.