Emerge yourself in the stunning visuals of the harbour with a maritime scene of yachts, fishing boats and the lifeboats station.

The sun has finally appeared here in Whitby and the harbour is glistening with the sun’s rays. The old cobbled streets of Church Street lead you to The Market Place where the Abbey Wharf is situated. This is the place to take in the essence of Whitby’s heritage and how the contemporary merges with it’s history.

The origins of this building that overlooks the harbour and the historic cobbles of The Market Place and Sandgate is that it was a Burberry Clothes Factory and it was transformed into a restaurant/bar with shops underneath. The style of the Abbey Wharf is that of modern maritime theme but still in keeping with a seaside style.

The Abbey Wharf holds a well-stocked bar and it is proud to have its own beer especially by Whitby Brewery, ‘Abbey Wharf Dry Hopped Blonde.’ It stocks over 20 gins and you can even order some of new latest gin to hit the market, ‘Whitby Gin.’ I have tried a sample (or two) of the Whitby Gin and it is one to try if you are a gin fan.

The Abbey Wharf has all areas covered for any occasion. They have a take away area so that you can grab some fish and chips and take pleasure in eating alfresco on the fish pier outside with the armour of hot vinegar. This place also has a restaurant with 250 covers with a seafood menu and a section of meat dishes cooked in a Bertha, a charcoal fired oven. 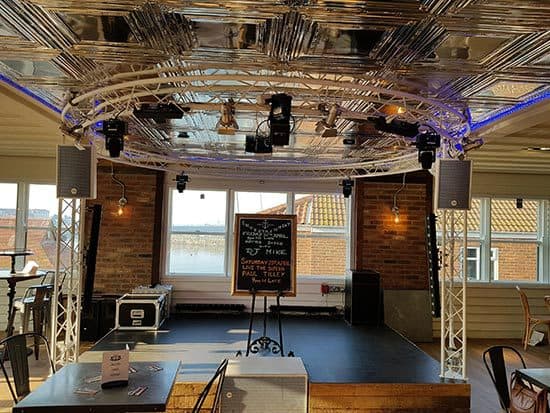 There is also an entertainment area that holds regular live music events and acts. Larger parties and functions can be situated in upper mezzanine level.

I visited the Abbey Wharf with my family for a meal whilst the sun was shining, and the Abbey Wharf was busy with a big cross section of people, families, big friendship groups, couples and dogs. The Abbey Wharf creates a relaxed atmosphere that can be felt all around as it is spacious for the different elements of drinking, food and music.

I chose a starter of marinated tiger prawns in garlic, chilli and parsley butter priced at £7.95 and my husband had battered goats cheese with red onion marmalade rocket and pines nuts, £6.95. These starters where fantastic with all the elements of the flavours complementing each other. My bairns picked of the “Bairns Menu”, my lad bairn picked battered sausage with chips and curry sauce.

My lass bairn ordered a chicken burger, with chips and curry sauce – these children’s meals are £5.75. Me and my husband picked dishes that are from the Bertha oven menu. I had a Ribeye, 14oz on the bone, chips with a pepper corn sauce at £20.95. My husband had a chicken skewer that was marinated in oil and paprika, served with vegetable skewers, BBQ sauce and chips – £11.95. Both meals had the distinctive charcoal flavour that enhanced both dishes.

The Abbey Wharf also has free WIFI to help teenagers endure meals with their families. This facility also helped to take the edge of the news that my teenage daughter broke to whilst eating that she had used up all her 4MB on her mobile phone for this month. This data allowance has been used up whilst she has been walking home from school whilst watching ‘Waterloo Road’ on Youtube. But don’t worry folks, she was very safety conscious of traffic by only listening with one ear phone in one of her ears!!! But let’s not think about the fact that she is watching her phone while walking!!!!!

We had a lovely family meal sat with panoramic views of the harbour and piers. Peter Holloway, deputy manager of the Abbey Wharf said the fabric of the business comes from his saying of “By Whitby, For Whitby.”

Overall the whole vibe of the Abbey Wharf is that it is non-stop venue of food, drink and entertainment whether you are with friends, family or your four-legged friend. You can emerge yourself in the stunning visuals of the harbour with a maritime scene of yachts, fishing boats, the lifeboats station and the local rowing clubs training in the harbour. You can be a witness to the hustle and bustle of pier road whilst drinking a pint of the Abbey Wharf Blonde beer on the Abbey Wharf balcony.

1 thought on “Abbey Wharf Review, A Local Review Of The Abbey Wharf in Whitby”