This lovely route is one of contrasts, heather moorland which changes with the season combined with dramatic cliffs and views out across the North Sea. Amongst its many highlights are the ruins of Rievaulx Abbey and the Whitby Abbey that has looked down from above since the 13th Century.

Captain Cook was a native of this part of Yorkshire. One of the highest hills in North Yorkshire is known as Captain Cook’s Monument while there are also reminders of this famous sailor and explorer in Whitby itself.

The rich history of places involved in this walk include former smugglers’ hideouts, old fishing villages, some of the most beautiful around and views that can take your breath away.

It is worth taking plenty of time walking the route because there is a good deal to see and plenty of accommodation that can be booked on the route. You may walk only 10 miles a day but what an experience it will be!

Henry VIII And The Abbey's

Walking is not compulsory and as you walk you may be passed by cyclists following the route and even some on horseback simply enjoying the lovely surroundings.

In total, there are over 100 miles of walks but the one that keen trekkers regularly take starts out at Helmsley, going across the Rye Valley, taking in a short detour to see Rievaulx Abbey.

St. Aelred of Rievaulx was one of Yorkshire’s most famous Abbots. It was founded in 1132 by monks from Clairvaux Abbey and was the first Cistercian Monastery in the North of England.

Henry VIII dissolved the monasteries in 1538 and he sold it to the Earl of Rutland. Some of its stone was transported for use elsewhere but it was an ironworks for years until lack of demand led to its closure in a century later.

Look Out For The White Horse

When you resume you will arrive Hambleton Hill then go down to Sutton Bank where there are even distant views of the Pennines. You should visit the White Horse of Kilburn, the image of a horse which stands out in white chalk for many a mile.

It has been there since 1857 when a Kilburn-born London businessman Thomas Taylor, designed and paid for a local schoolmaster, John Hodgson and his pupils to fashion the image that covers 1.6 acres. Volunteers have lovingly maintained it ever since.

Heading along the western edge of the North York Moors National Park, there are some tremendous views; the highest point you reach exceeds 1,300 feet.

The next village to enjoy is Osmotherley with its pubs and cafes. Relax, because you are approaching a hilly section within the Cleveland Hills. All day long, there are lovely views on clear days as you continue on to Great Broughton.

It is a lovely village for an overnight stay with the following day taking you onwards towards Kildale but not before you reach the highest point on the walk, Round Hill at almost 1,500 feet. 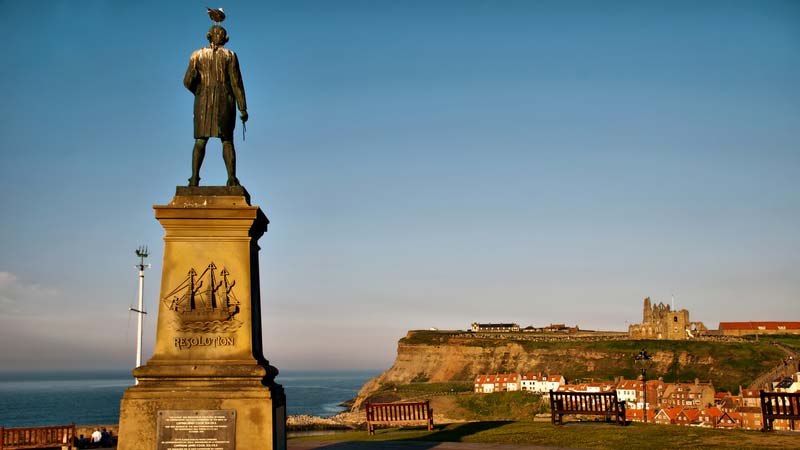 Onwards from Kildale, you are in Captain Cook territory and the hill bearing his name. Cook was born in Easby in 1728 and if you have time, go beyond the Monument to Rosebery Topping, a fairly gentle 1,000 feet but with a sheer sandstone face on one side where the rock has fallen away. It has been nicknamed the ‘’Yorkshire Matterhorn’’ by locals.

The town of Guisborough is below but your destination is the coast and Saltburn – by – the – Sea, the furthest point north on the Cleveland Way and just beyond halfway.

A town of just 6,000 and possessing a lovely beach, Saltburn has been popular with families since Victorian times. The coastline heading south from here is largely cliffs but there are small coves with beaches and little villages where fishing was the main occupation.

From this point onwards, you are walking back down the Coast. Tourists visit all the small villages down this coastline in numbers. There is plenty of accommodation but plenty of demand as well so you should definitely book in advance.

The first village you reach as you go down the Coast is Staithes, a charming village worth spending a little time.

The Heritage Centre is definitely worth a visit while you are in Staithes. It is a village of narrow streets and old fishermen’s cottages and in recent years, the village has launched a weekend Festival that is proving very popular.

You must head on because you should aim to spend the night a little further down the coast at Runswick Bay. The highest cliff during the day will have been at 1,000 feet in Boulby but it is the second of two cliffs.

You climb the first, descend and then climb again. You can be at the highest point on the East Coast as well as the lowest on the same day.

Runswick Bay is a lovely village built on a slope looking out to sea. The village had to be relocated as many cottages slipped into the sea back in the 17th Century.

At its height, there were as many as 20 herring fishing boats operating out of Runswick Bay and the dramatic coastline continues through Sandsend to Whitby.

Whitby of course has a well-established tourist trade. The 199 Steps up to Whitby Abbey are climbed by a huge number of visitors each year. Visitors should certainly try the fish and chips while in Whitby, perhaps washed down by some real ale?

The Cleveland Way continues south from Whitby to the adjoining village of Robin Hood’s Bay, another village that almost seems to perch on the slopes. As late as the end of the 18th Century, this was a haven for smugglers who knew every narrow alleyway.

Scarborough is a little further on with the road going over moorland with the sea on the left. It is a fairly large seaside resort that has been popular with people far beyond the boundaries of Yorkshire for many decades. There are lovely beaches and plenty of amusements and accommodation in Scarborough.

The final leg is another 12 miles or so, Filey which Butlin’s selected for a camp in the days of his developing camps throughout England and Wales for family holidays. Its days as only a small fishing town were over.

You don’t need to do the whole of the Cleveland Way in a single holiday. You can enjoy different sections at different times. Comfortable footwear is taken as read and pair of binoculars will certainly help you to see wildlife as you walk. There is plenty of information on accommodation readily available and maps of the walk in case you need any assistance.