North York Moors walks offer heather-clad ridges, endless valleys, quaint villages, and that iconic rugged coastline. Here are 8 of the best walks in the North York Moors for you to try.

The famous White Horse of Kilburn was the idea of a local man who made his money in London. It was created by a schoolmaster and his pupils in the middle of the 19th Century and maintained by volunteers for years afterward. The outline was marked out and then the earth was removed down to the limestone rock. From time to time subsequently, chalk chippings are added to maintain their appearance. It is visible from miles away but you can get really close up by taking a walk to it from Sutton Bank National Park Centre.

This North York Moors is three miles long and follows the dramatic escarpment edge for magnificent views, then drops down on woodland paths beneath the cliffs before climbing back up beside the horse itself.  While you will be able to appreciate the size of the Horse when you are close by, its overall appearance can only be appreciated from afar. However, the walk is lovely and you can always see the White Horse from a distance and remember that you have been there.

One of our favourite walks in the North York Moors offers fantastic views of the National Park. It is eight miles long over Cold Moor towards the stunning rocky crags of the Wainstones. While the walk is a challenge, the rewards are well worth it. You may come across rock climbers trying to scale the crags and you will certainly see the highest point of the North York Moors, Urra Moor. The route you take is through heather along moorland tracks on Cold Moor and Urra Moor. They are well-defined although they can be wet, even boggy so you need good footwear. Weather conditions vary and even in summer you can find that visibility is suddenly poor.

The Wainstones are the largest sandstone crags in the North York Moors. The pillars and buttresses are exposed to the elements so it shows how resistant they are to weathering. Where there are weaknesses, wind and rain have penetrated cracks to create the landscape you see today. The sound created by strong winds is quite eerie. Human activity has made an impact on the landscape over the years and it's really interesting to view! 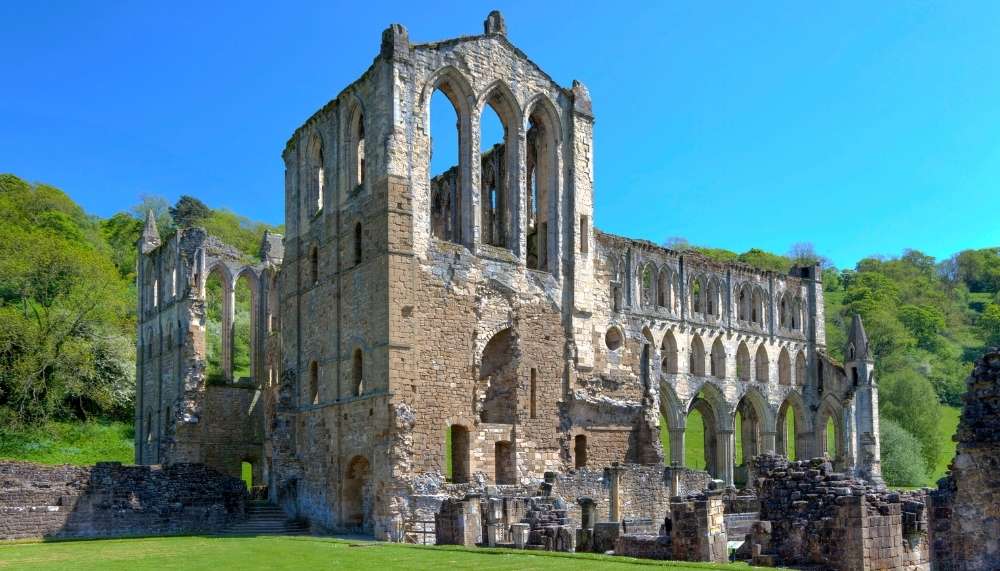 The market town of Helmsley to Rievaulx Abbey is a walk that has never lost its popularity. This is a circular route of 7 miles with gentle climbs to reveal good views of the town and its Castle. It goes down through woods, and their bluebells when in season, to the impressive ruins of Rievaulx Abbey. You may return the same way or alternatively continue to Rievaulx Terrace and Griff Farm which is located above the Abbey. This is the first section of the Cleveland Way National Trail; just follow the signs and you will be fine. One section uses a minor road to Rievaulx Abbey and up to the terrace although at certain times a path is open.

This lovely 7-mile hike that includes 2 popular landmarks is one of the most popular walks in the North York Moors. You can start from the railway station by crossing the bridge and heading up the road or by parking in Newton Under Roseberry car park and heading up Roseberry Lane. Roseberry Topping is just over 1,000 feet, a climb more than a walk but the paths and tracks through woods and over moorland are easy to follow. An alternative is to that route is somewhat gentler, starting at Gribdale Gate and heading to Cook's Monument named after the locally-born Captain Cook.

Roseberry Topping is most unusual; avoid the steep face that makes the Hill such an interesting sight. The top is sandstone but the western face was the result of a collapse in 1912 after years of mining alum, jet, and ironstone in the hill. Newton Wood, on the slopes of Roseberry Topping, is seemingly over 400 years old and much more of the North York Moors was formerly woodland. You will see oak, rowan, ash, alder, and sycamore; most of the oak was planted in the 19th Century. The Wood’s birdlife includes great spotted woodpeckers, flycatchers, warblers, and blue tits.

5. Levisham and Hole of Horcum | 5 miles 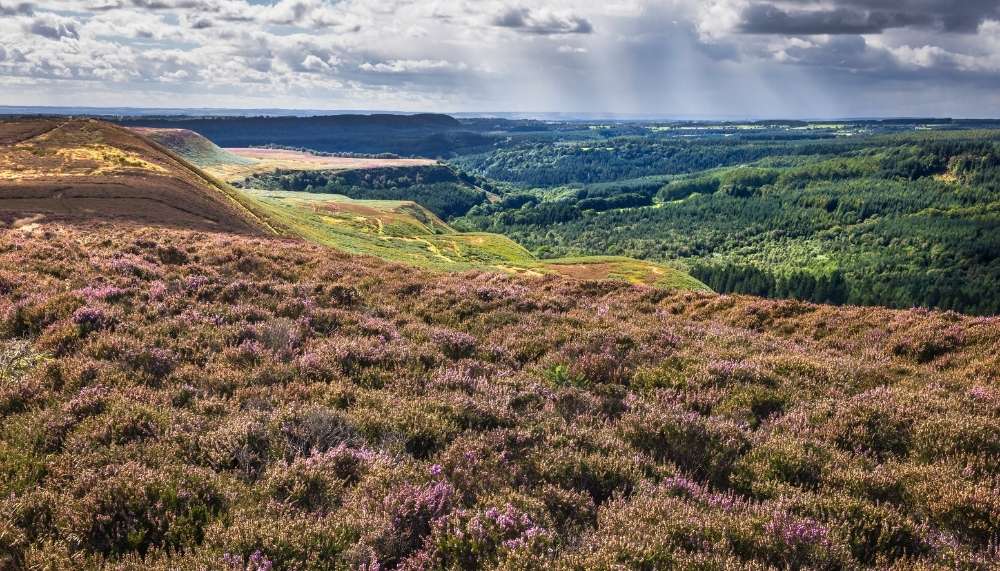 This 5-mile walk should be on everyone’s list. The views are wonderful as you walk from Saltergate to the Hole of Horcum following a well-defined path over Levisham Moor. En route, you pass some important archaeological remains. Skelton Tower is a slight diversion which is well worth it for the views. On you go into the ravine of Dundale Griff and return through the valley to the Hole of Horcum before climbing back out at Saltergate. At times the path over Levisham Moor may be muddy, but not too slippery. It is more important to be careful in the ravine of Dundale Griff which can be slippery.

Ruined Skelton Tower looks down into Newtondale over the North York Moors Railway tracks. Robert Skelton was the Rector of Levisham and built the Tower in 1830. Enjoy a picnic there listening to the sound of the stream and make sure you take your camera.

The Hole of Horcum is a natural amphitheatre 400 feet deep and over half a mile across. Legends talk of the ‘Devil's Punchbowl' where Wade the Giant scooped out the earth to throw at his wife when they argued. The truth is that its formation was the result of spring water undermining the slopes of the hillside over thousands of years. A narrow valley became what it is today. The archaeological remains on Levisham Moor date back to Bronze Age life and include banks, ridges, ditches, and mounds which were likely boundaries as well as defensive constructions.

This short walk in the North York Moors National Park takes you across Great Ayton Moor to an isolated World War II building, masquerading as an entire city in order to save Middlesbrough from burning. The North York Moors seems an unlikely location for psychological warfare, but this walk on the national park’s northern edge takes you to see the remains of one of the war’s most covert defence strategies. From the car park by woodland just north of the 15m high Captain Cook monument, cross the road and take the right-hand track, past the ‘SSSI Moorland’ sign.

From high on the cliffs of Ravenscar, this hike follows the coastline to the narrow of Robin Hood’s Bay, gently meandering back inland via the old Scarborough-Whitby railway. This walk boasts truly exceptional views across the bay from start to finish. Start by heading towards the coast on Raven Hall Road and continue by passing the National Trust Coastal Centre on your left to reach the gates of Raven Hall Country House Hotel. Turn left before the gates, following a downhill track signposted towards Peak Fault. Instantly you will be hit with exceptional views, this is a special start to a special walk.

8. Feeling brave enough for the 182 mile Coast to Coast walk?

We have to mention the Coast to Coast Walk. Perhaps one of the most famous unofficial footpaths in the world, this 182-mile journey starts in St Bees on the west coast and finishes in Robin Hood's Bay. Devised by Alfred Wainwright, the walk crosses the Lake District, Pennines, Yorkshire Dales, the Vale of York, and finally North York Moors. Traditionally the walk is made from west to east, with the bay as its final destination, though the walk can also be made with Robin Hood's Bay as the starting point. With a long history and heritage surrounding this route, thousands of people complete this walk every year.

Let us know if you have completed any of these walks in the North York Moors in the comments, we love to hear about your experiences!