Robin Hood’s Bay beach is a sandy rocky cove framed by a rugged craggy cliff face that sweeps around the bay like a thick layer of icing on a cake of bracing North Sea filling. The rare and impressive beauty of this beach lies in the juxtaposition of the quaint and dainty Fishermen’s cottages sitting atop this stark and often bleak headland.

The beach is sandy with rocky outcrops and can be jagged underfoot. The water of the North Sea is particularly cold so swimming is bracing and tanning unlikely – the wind can blow quite a gale at times (that said a cheeky skinny dip and a picnic is well within the realms of possibility. I know because that’s exactly how it was when we were there 😉

It is this natural beauty that makes Robin Hood’s Bay such a popular destination for amateur photographers. As the tide rushes out a new scene is revealed as the dedicated and quick fingers of the local nature paps capture the rock pools and tidal swell in it’s daily retreat. The sweeping arc of the bay gives the resting images a familiar and cheery backdrop – the village sits like a crown atop the head of a merry monarch.

There are plenty of local myths and legends about the naming of this particular bay after the Nottinghamshire hero. Our favourite link is that the smugglers of old were seen to be the local equivalent and so the name stuck. Whether you believe in such stories is another matter but the fact is that there is little evidence that the Merry Men, Maid Marion or indeed Robin himself ever visited the Bay.

Many places along the East coast of Britain have a history of smuggling. Local villages such as Staithes, Runswick Bay and Whitby have long had ties to the art. Robin Hood’s Bay is one of the many places along the Yorkshire coast where it is rumoured that underground tunnels link cottages to the beach. Walk the winding cobbled alleyways and it’s easy to make the connection.

Happily, the beach has no restrictions whatsoever for dogs. You are free to roam the entire stretch of the beach with your four legged friend. There’s plenty of space for Fido to stretch his legs before retiring to the Bay Hotel for a pint of something delicious.

Robin Hood’s Bay beach is part of the Dinosaur coast. It’s a very popular spot for fossil hunting. At low tide there are many places where it’s possible to find ammonites, belemnites and footprints. There have been some historic examples discovered along this stretch. The best of them are housed in the museum at Whitby – well worth a visit!

For your safety and enjoyment it is best to check the tide times. The tide moves in exceptionally quickly at Robin Hood’s Bay beach submerging the entire bay. Fossil hunters and dog walkers have been caught out in the past. For young and inexperienced fossil hunters there may be more suitable places to search for bounty.

The cliffs along this stretch of coast are perilously loose. There have been many instances of rock fall and in Whitby even bodies from St Mary’s Churchyard have been known to tumble down in to Henrietta Street and the beach below. With this in mind it is best to exercise a measure of caution when walking along the beach in close proximity to the cliff edge.

There are a couple of car parks in Robin Hood’s Bay – a detailed guide of which you can find here. The more hardy and adventurous may choose to walk to the Bay from Whitby. Details of that escapade can be researched here. There is also an occasional bus service.

There are many and plentiful establishments for refreshment of all kinds in Upper and Lower Bay. The Bay Hotel will restore your well being in the immediate area of the beach following our exertions. Further up the hill there is the Laurel, a traditional old Fishermen’s pub and the not to be missed Smugglers Bistro. Then as your legs begin to wane under the strain of the ascent there’s a number cafes, and restaurants for a more substantial refuel. Arriving at the top of the Bay there is the Victoria Hotel and a superb sea view. Just the tonic!

In 2017 Robin Hood’s Bay beach was named among the top 30 beaches in the world. Chosen for it’s sublime natural beauty, the Bay has long been a top pick for photographers and dog walkers. The competition was fierce with the best beaches from around the world battling it out for a place in the list. Passport Magazine, an online lifestyle and travel publication conducted the report. 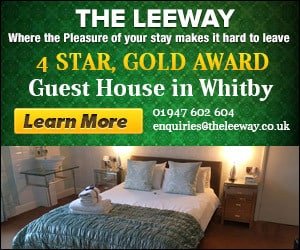