Throughout history, men have made a living from smuggling goods and living under the nose of the taxman. Whitby and the surrounding villages were a hotbed for smuggling for generations, with tales of hidden tunnels and secret societies a plenty. Here are a few Whitby smuggling tales for you to enjoy.

The Old Smuggler’s Cafe takes its name from the main use of the pub, it was previously known as ‘The Old Ship Launch Inn’ during its hay day. It was extremely well known for the fact that smugglers would use the pub to deliver their untaxed goods, there was even an article written in the Whitby Times, in 1790, about a certain smuggle that went down;

“Yesterday se’nnight the Fawn, smuggling luggar, with a thousand ankers of rum, brandy and geneva, to the amount of 6000 gallons, was taken and sent into Whitby, by the Eagle cutter, Captain George Whitegead, in the service of the revenue of that port; with assistance of the Mermaid, Captain Carr. The Fawn is a fine clinch built vessel of 90 tonnes built at Flushing four months since, mounting six four pounders and six swivels. Her crew consisted of 22 men”

In fact, there are even rumours suggesting that there is a secret tunnel that connects from the Old Smuggler’s Café to the Station Hotel, which then leads to the harbour, the contraband would arrive at the harbour and would be transported via the tunnel to one of the two pubs.

John Andrew ‘The King of Smugglers’

John Andrew was a prolific smuggler who was the landlord of the Ship Inn, in Saltburn. John Andrew was so prolific, in fact, he was known as ‘the King of Smugglers’, and his pub became known as the free trade hotspot of the area. John had strong connections in the area, and all the landlords of the local taverns stuck together in their trade and connected tunnels underground so that their dealings would go on unnoticed.

Smuggling wasn’t just a man’s job, in fact, in Whitby, women were encouraged into the trade as they could often get away with their crimes unnoticed – the taxman was unwise and thought that women wouldn’t possibly get into such unlawful dealings. Regular housewives would go to market wearing loose fitting clothes and return home with their clothes bursting at the seams, underneath was a treasure of contraband goods. Mrs Gaskell, who lived in Whitby at the time, commented “There was a clever way in which certain Whitby women managed to bring in prohibited goods. In fact, when a woman did give her mind to smuggling, she was full of resources, and tricks, and impudence, and energy more so than any man”

The fire of the Saltersgate Inn

Located on the North York Moors, close to a bend in the road known as the Devil’s Elbow, you will find the Saltersgate Inn. It is now derelict but the original building still stands. The Saltersgate Inn was originally known as the Wagon and Horses when this tale took place. During the 1800s the Salt Tax was the highest it had ever been in British history, and fishermen, as well as smugglers, saw the great opportunity that lay in wait at the Saltersgate Inn as it was practically isolated from mainstream society. Fishermen would need salt to salt their fish to keep fresh as they transported them to buyers, but with the salt tax being so high there was no money to be made, and so salt began being smuggled.

A candle would be placed in the window of the Saltersgate Inn that would warn others of taxmen being in the pub. One night when the light wasn’t lit smugglers and fishermen made their way to their old haunt. Unknowingly an Excise Officer had managed to go undetected, and he was ready to make arrests after hearing rumours of the illegal business.

When the Excise Officer made his way down to the basement to catch the culprits red-handed, he did not foresee what happened next. A rock came crashing down on his head, killing him instantly, it was the Landlord who had dealt the lethal blow.

In a panic, the men buried the corpse underneath the fire pit, and it is said that if the fire were to be put out the ghost of the Excise Officer would come back and seek revenge. Which is said to be the reason for the fire burning for nearly 200 years.

Learn more about the legends of the Saltersgate Inn here; Part 1, Part 2

Most of the time it was difficult to avoid Excise Officers, eventually, they would catch up with you and arrest you for smuggling but one person managed to play the system so well that he was never caught until after his death.

Captain Harold Hutchinson, of the Dragoons Guards, became the Customs Officer after the Dragoons Guards were based in Whitby for three years to clamp down on smuggling in the area. But he wasn’t the cleanest of folks, in fact, Captain Hutchinson would often take contraband, that had been taken from smugglers, and then sell it on himself. Captain Hutchinson became the Excise Officer that was also a smuggler, he made so much money in his time that he made himself a beautiful home in Skinner Street known as ‘Harold Mansion’ 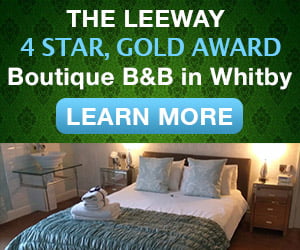