We all already know Whitby is one of the best places in the world to visit. But what if you want to learn even more about the town? Well, there are lots of Whitby books you might wish to read.

Here are some of our top recommendations for the very best books about Whitby. From walking guides to gothic novels, these Whitby books are a fantastic read if you love this unique seaside town.

Scravir is a fast-paced modern gothic thriller that is set in a stormy Whitby during the annual Goth Festival. Whether you love to visit Whitby or you're desperate to take a trip to see it for yourself this novel will transform how you imagine this seaside town, it blurs the lines between reality and imagination. What could be hiding right in front of your eyes? What do you miss because we simply just live day to day without really looking? Its exciting twists and turns will have you totally hooked.

Love walking? Then you need to get yourself this book. Discover the history of Whitby, Robin Hood’s Bay, and Staithes on the North Yorkshire Coast through themed walks, beautifully illustrated with maps, pictures and interesting stories. From the legend of Dracula and the ruinous Abbey to the tales of Captain Cook in Staithes and smuggling in Robin Hood’s Bay, this book is the perfect pocket guide to your stay on the North Yorkshire Coast. In Whitby, you’ll find ten walks that take you through the streets and ancient buildings. There's even a pub crawl walk which might just be our personal favourite!

Even if you have been coming to Whitby for many years, you are likely to learn something you did not know by reading Secret Whitby.

Co-authors Ian Thompson and Roger Frost have created a brilliant book you will go back to again and again. The ideal companion to a holiday in Whitby.

A History of Whitby

Some of Whitby's legends are well known all over the world but author Andrew White has gone well beyond the surface in his tome, A History of Whitby.

Claimed to be the only comprehensive history of Whitby, a fully updated version was launched at the start of 2019 after the previous edition of the book completely sold out.

There are new illustrations to enjoy in the latest edition of A History of Whitby, making it well worth a purchase for anyone who is interested in reading Whitby books.

Perhaps best described as an ideal companion piece to A History of Whitby, author Robin Cook shows readers both the most famous sights of the town as well as some of its secret spots.

This Whitby book comes with a very handy location map, which it is easy to spend lots of time poring over in order to see everything that the town has to offer.

Many Whitby books tend to be non-fiction, but instead, this novel is set in the coastal town.

Author Cassandra Clark has amassed plenty of loyal readers through her popular series An Abbess of Meaux Mystery and she might just pick up more after the release of this book.

If you buy this book and enjoy it then you might wish to read the rest of the long-running series – Murder at Whitby Abbey is book 10! – starting with Hangman Blind.

Another story set in Whitby here, with a tale of vampires, shifters and demons created by writer Stella Coulson.

The novel, which was first released in 2014, tells the story of teenager Lenore Lee, who moved to the town and is engulfed in plenty of drama.

The inspiration of the book clearly comes from Dracula, but it is worth checking out and it is the start of a series from Coulson. She won a Golden Book Award Reader's Choice Semifinalist Award in Horror by Golden Box Books for this story.

Did You Know? Whitby: A Miscellany

Compiled by Julia Skinner, Did You Know? Whitby: A Miscellany has been around for quite a few years but it is certainly worth picking up even now.

This Whitby book makes up part of a series of gift books and they really do make an ideal gift.

If there is a loved one in your life who adores Whitby, this could be the perfect present for them!

One of the most famous books about Whitby, The Whitby Witches inspired The Power of Dark.

Many people who have read Whitby books will already be familiar with the story, which centres on orphans Ben and Jennet who arrive in the town, but it is well worth revisiting.

If you enjoy reading The Whitby Witches you could also get stuck into the Deptford Mice and Whitby Witches series, which have also been written by Jarvis.

Whitby Between the Wars

Another historic look at Whitby, Whitby Between the Wars tells a lot of the untold stories of the town during the period between World War I and World War II.

Author Colin Wilkinson presents a gripping book about what happened in Whitby between 1919 and 1939 that also features a lot of old pictures of the town.

It is fascinating to see just how much Whitby has changed over the years, despite some things managing to stay pretty much the same!

Most people probably already know some ghost stories about Whitby, but anyone with an interest in the supernatural should consider picking up this Whitby book.

The Whitby Ghost Book: Hauntings Legends & Superstitions has been compiled by Paul McDermott, who is the former Collector of Dues of Whitby Harbour.

The same writer has produced a few other books about Whitby including Christmas Customs of Old Whitby, which is also highly recommended.

An ideal coffee-table type book, it is clear a lot of love has gone into Whitby: A Pictorial History.

This brilliant book about Whitby features dozens of drawings, maps and photographs that are presented in black and white. A fascinating read.

The Original Ghost Walk of Whitby – The Tour in a Book

Whitby books that focus on ghost stories are quite common but this one might just be one of the best of its kind.

The Original Ghost Walk of Whitby – The Tour in a Book, which is by author James J Browne, features some of the most famous Whitby ghost stories as well as some less-heralded tales.

Perhaps the highlight of this one is its detailed background to the legendary story of Dracula. 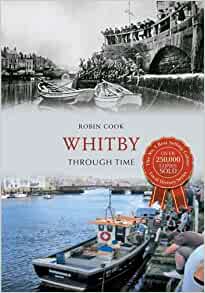 Another effort from author Robin Cook makes it into our list of the best books about Whitby.

Whitby Through Time has sold more than 250,000 copies since it was first released, so it is certainly one of the most popular Whitby books to have ever been written.

Did you know Whitby had a key role shaping the development of the church in England? This book goes into a great level of detail about that time.

Last but not least, Around Whitby is another of the best picture books about Whitby available.

This book is part of the Images of England series, with author D.G. Sythes having compiled it.

1 thought on “Whitby Books, 14 Books About Whitby You Must Read”