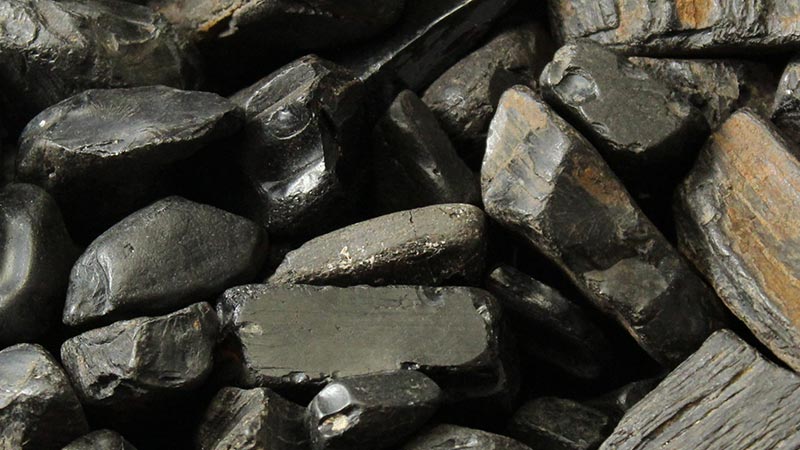 What is Whitby Jet?

With hearing the name Whitby Jet, one might think you are talking about an airline and not one of the most revered gemstones in the United Kingdom. The northern coastal town of Whitby, located in North Yorkshire, become the centre for turning the stone into jewellery and artefacts, which had its heyday during the Victorian era.

Most geologists think Jet is the fossilised remains of a tree, similar to the monkey puzzle tree, while others think it is a mineral deposit like turquoise or a by-product of coal formations. Whatever its original origins, jet has been mined and used since the Bronze Age of man through the Victorian era and beyond.

Whitby jet is only found along the seven and a half mile stretch of coastline by the town that bears its name. It was mined from the cliffs and moors of the area and now it can be found along its beaches where anyone can easily pick it up as a souvenir if they are so inclined.

While it has a long history, the pinnacle of its use was in Victorian England when it was fashioned into black jewellery that become popular for mourning the death of a loved one and as a fashion item. During the peak of production, there were about 200 shops in Whitby fashioning jet jewellery. However, there are pieces of jewellery and artifacts that have been found dating back to the Roman Empire.

At the sight of an old railway station excavation in York, a coffin, found to hold the remains for a Roman woman, revealed her hair held back by pins made from jet.  A monastery in Saxon, Streanaeshalch, revealed pieces of jewellery and literary evidence of jet made into beads, rings and crosses that the monks had worn. Vikings, who had sacked York, fashioned jet into crosses, one of which had been unearthed in York. A chess piece, also believed to be of Viking origin, was found as well.

It was the ingenuity of a boat captain, who observed two men in Whitby manufacturing beads and crosses from jet, that made the production of jet easier to do. While the men, John Carter and Robert Jefferson, used files and handmade implements to work jet, Captain Tremlett, had experience turning amber on a lathe to produce pieces, wondered if the same could be done with jet.

With the help of a turner, Mathew Hill, they successfully lathed jet and, despite Hill’s uncertainty about the economic success of the process, the Captain went ahead and hired him as a jet turner and the first jet workshop in Whitby was set up in John Carter’s Haggersgate home in 1808. By 1850, there were more than 50 such workshops existed, producing beads, jewellery and other items.

Imitation jet pieces coming onto the market, combined with cheaper imported pieces, lead to the collapse of the industry by the mid-1900s. At one point, jet production meant work for over 1,400 men and produced an annual profit of over £100,000, which is approximately three million pounds by today’s standards.

The industry has experienced a revival of sorts in recent years and new Whitby jet pieces are being produced and sold. There are several websites you can visit to purchase Whitby Jet items, both modern and vintage era pieces. The prices on these items, ranging from necklaces to earrings to brooches, start in the hundreds of pounds to the thousands of pounds for pieces from the mid-1800s.

The Victorian era pieces are still beautiful, with their smooth black sheen and buying a piece gives you the chance to wear a unique piece of Whitby history.